October 2016 saw the directorial debut of member Rachel Feeny-Williams with the fast paced and witty, Wife Required. A completely sold out one night production, the play told the story of Henry Aspinall, a businessman who begins the play advertising for a ‘Wife Required’, much to the display of his assistant, Anna Gott, who is very much in love with him herself.

Hilarity ensues with the arrival of Henry’s first potential matches, Barney Dare. A brash and British explorer by trade, Barney is seeking a husband as more in a house keeper capacity while she is away on her troubles. Despite her best efforts to ‘get down to tin tacks’, Henry is not convinced and asks her to wait for him to decide.

Following this their arrived another woman, played by the director herself. A conversation of crossed wires follows, ultimately leading to Henry proposing. The horrified woman then reveals she believed she was there for a job interview, as it turns out she is in the wrong place! 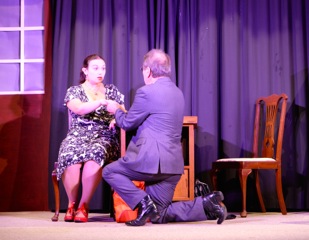 Shortly after her hasty departure, Miss Gott, tired of having her romantic wants unmet chooses to throw her own hat into the ring but is interrupted by the arrival of a third woman, Avalon Pippin. Avalon proceeds to tell Henry how she was brought to him by her spirit guide (Mirabelle) but Henry doubts the quality of Mirabelle’s work, leading Avalon to fall into a trance on Henry’s sofa. 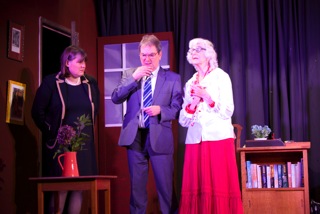 While trying to unsuccessfully arouse Avalon, Henry is interrupted by the return of the woman (known only as ‘The Girl’), who proclaims she has changed her mind on marrying him. However, never one to have his way, Henry mistakenly finds himself in an embrace with Avalon (as he has his eyes closed) and The Girl walks out of his life once and for all. 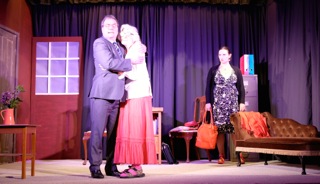 A chase around the office and the return of both Barney Dare and Anna Gott leaves Henry cornered. That is, until the arrival of ‘An Elderly Lady’ reveals that not only has Henry agreed (in one way or another) to marry all three of the other ladies in the room but that he is also married already!