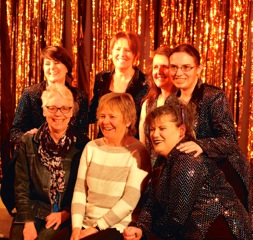 Exton Drama Club are a fun and enthusiastic group all of whom share a passion for theatre. We have delighted audiences for many years with our productions, ranging from one act plays to our pantomimes. Below is a speech given by Club member, Elsie Wood when the society celebrated its 50th Anniversary!

“Exton Drama Club was born oddly enough at about the same time as my daughter and the Royal Shakespeare Company. The very talented Louise Trayler was the instigator, who over the years organised, acted, directed and latterly designed and made costumes, some of which still surface from time to time. One reason for the club’s inception was to raise money for the ever cash-strapped village hall, no change there. After one early performance, an appeal was made for actors, preferably male and under 30-no change there then either.

In the first years, productions were staged in Lympstone village hall, with a Three Act or three One Act plays, usually in the Spring. The Courtenay ladies, the Morleys and Spencers among others were heavily involved – all now sadly gone. During the 70’s more familiar names appeared in progammes, and John Sharples came in 1972 and so is I think the longest standing member.  Charlie Couch did a monologue in Exton Village Variety a year or two later. Then came Freddie and Beryl Bolt, Ann and David Hacking, Vee Bushell and Audrey and Ken Moynehan, Shirley and Geoff Stevens. Youngsters like the Stevens boys, Peter Ogilvie and Julia Bolt became involved.

Towards the end of the 70’s, a production was added in the latter part of the year and the club became a very busy one. All manner of things were getting done, and high standards became the norm. In 1985 came Bluebeard, Meg and Louise’s brainchild. It was produced under the steely eye of meg, and was the first of a long series of Christmas shows and Pantomimes. Lynn and Mark Copp made their bows as did Katrina, Jean Takle, Dianna and Dennis Chiffers, Lillian appeared back stage, all complementing the special talents already here. For its 25th anniversary celebration, Ada Follent, the terror of the kitchen and guardian of the mince pies, made a cake

In the 90s, the Pantomime became an annual event. On a personal note, one of my first memories of the club when Brian and I arrived in 1990, was the sight of Jan Parr leaping out of a grandfather clock, a shrieking witch with clawed hands extended. Audrey, Ann and John were the chief producers though the Chiffers did a couple and Christine Waugh wrote one in rhyme. Les Richards, Ken Mullins, Peter Oglivie and Mark Copp were memorable dames, backed up by principal boys and girls, knock about characters, scenery painters and designers like Deirdre Rogers and Geoff Brown backstage crews, costume makers and song and dance, who can forget Jackie Clayton’s routines.

Audrey and Ann hung up their magic wands and broomsticks around the Millenium and Katy Jones, Katrina, Hilary and James Hasler carried on the high standard sets and Freddie, James, David Snell and Will donned the dames fancy frocks. Tall men like James and David, in high heeled shoes and big hairdos were a sight to behold. Many children have come and gone, some beginning as tiny children and going on to play major roles. Music is a big part of panto, in the beginning Mary Knight presided over the hall piano, then Dennis. When the piano had to be put to sleep, Ken took over on his keyboard and Trevor has been he impresario for the last few years.

The clubs involvement with Exmouth’s One Act Play Festival began in the early 80s and in 1998, our entry went to the Sidmouth Festival, the brainchild of Heather Skermer, who with Geoff was with us for a time. The entries were always well received and won many awards in all categories, Mrs Moynehan has quite a collection. Hilary’s production of ‘Audience’ was a winner. The large cast and enormous set, made largely by John, trundled up to Woking, during a heat wave to the All Winners competition. They were pipped at the post by a dire oeuvre set in a cellar, with gloom and cutting of throats figuring large in proceedings, not to the taste of the average audience member I think.

More recently, the Double Bill of two One Act plays has become a Supper Theatre and is popular. This of course means that a team of long suffering caterers, Lilian, Mary, Eunice, Bridget and Beryl, led usually by Ann are pressured into service, all female please not, no budding Jamie Olivers or Gordon Ramsays ever step forward.

During the noughties as they say on Radio 4, club membership expanded. New members came from all walks of life, all bringing their own special talents. It didn’t seem at all difficult for several years to put on four productions each year. As well as the ever popular traditional material, more unusual and difficult plays were performed like Nobody’s Perfect and Improbable Fiction, proving very successful.

Looking through the scrapbooks and knowing what I do of Eton Drama Club, it seems to me that the enormous range of talent an steady commitment shines through. People work endlessly backstage as well as acting. In addition, we should not forget the activities going on behind the scenes, the very important teams who do Sound and Lighting, organised props, prompt, coffee makers, ticket sellers, front of house, program designers and stage managers.

The group has always been a cheerful lively one, welcoming the folk who join because they like the way we operate. Many have on for a variety of reasons and we wish them well. Over the 50 years of its life Exton Drama Club has provided entertainment, fun and friendship to many people. Shall we then rise and drink a healthy toast to its past, its present and its future.